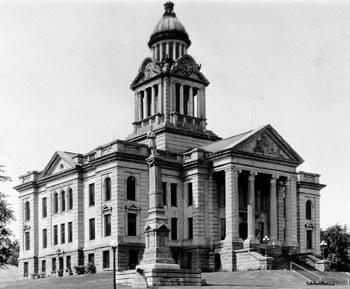 Winneshiek County is named after the chief of the Winnebago Indians. Winneshiek was the adviser to the War Chief Black Hawk.

In 1847 the early settlers asked for the organization of the county. On April 7, 1851 elections were held and the county seat was voted upon. The choices of county seats were Lewiston, Moneek and Decorah. The favorite to win was Moneek, but due to voting fraud and lost ballots, Decorah won with only 63 total votes being cast. This election was followed by several other bids for the county seat. Bids came from the town of Freeport, from 1854 to 1856. In 1898 Calmar also made an attempt to gain the county seat, but it also failed.

The first courthouse was completed in 1858 at Decorah. The final cost was approximately $18,000. In 1890 there was an attempt to replace this building with a more appropriate one. After pleading with county officials, it was placed on the ballot in 1898. It was overwhelmingly defeated. On November 3, 1902 it was again voted on. This time the count was 2,580 for a new courthouse and 1,584 against. The voters approved $75,000 for the new courthouse, and one year later they approved an additional $50,000 to complete the already-started project. The cornerstone was laid August 22, 1903, and the new building was occupied in November 1904 and is still in use today. In 1974-75 all new windows were put in the courthouse.

A renovation project was done to the 2nd and 3rd floors of the courthouse in 1990 and 1991 with a portion paid through grant funding. The courthouse was also repainted back to its original colors. In 2000 a new jail was built adjacent to the Sheriff’s office.